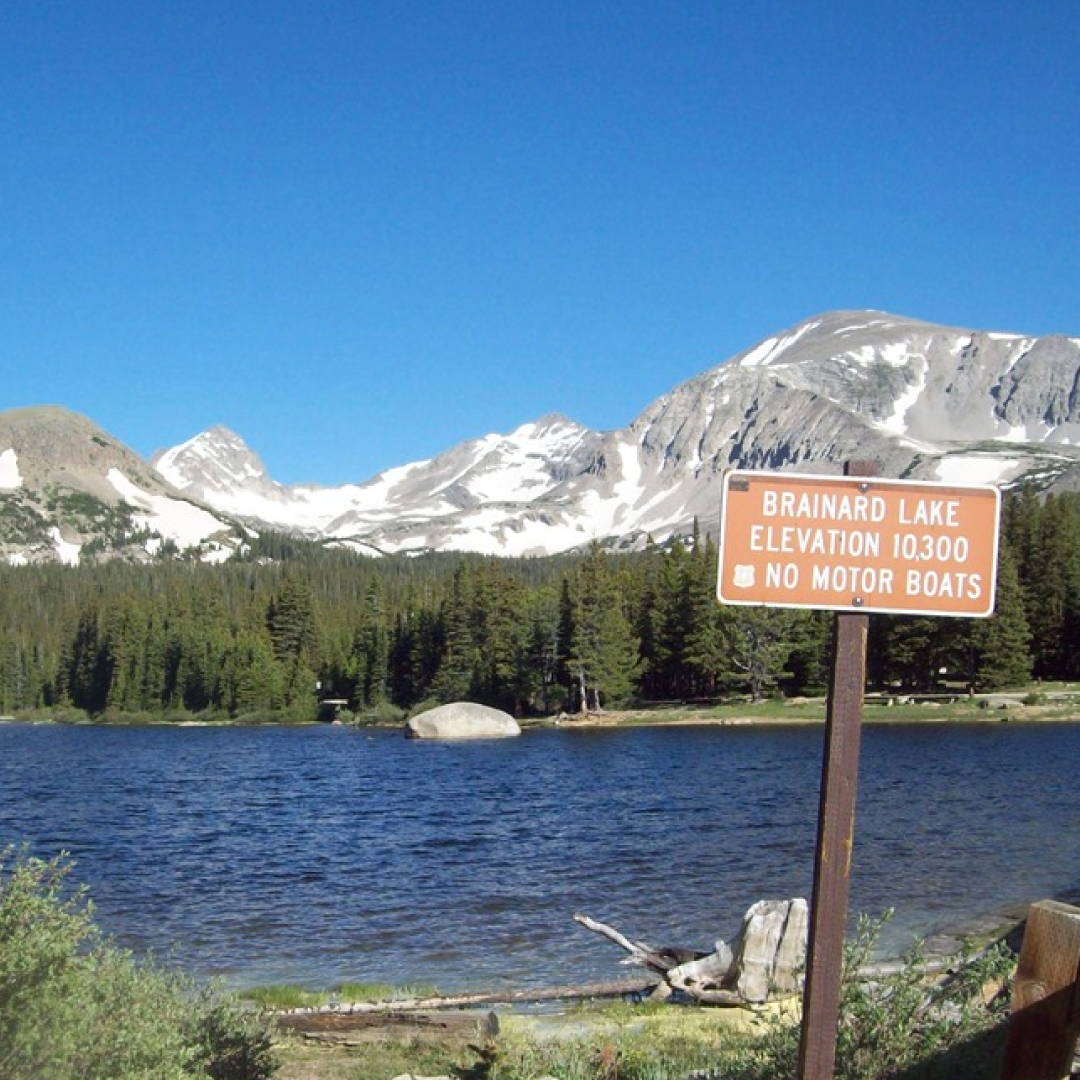 After doing the Longs Peak Duathlon a few weeks ago, I decided to research other projects for next summer, just in case 2021 happens to be another non-race year due to Covid. Turns out there aren’t many established mountain duathlons, so I might have to create some of my own. But I did happen upon the Audubon Duathlon on the Fastest Known Time website. It starts right here in Boulder at Broadway and Lee Hill and summits Mt. Audubon, which is near Brainard Lake for all you cyclists who have no clue where it is (I didn’t anyways).

The route: ride up Lee Hill, descend the backside, ride up through Ward to Brainard, and leave the bike behind at the Mitchell Lake trailhead for an eight-mile round-trip run/hike up Mt. Audubon, which has a modest elevation of 13,229 feet. Then you ride back to Boulder of course. Round trip, it’s 52 miles and a little under 9,000 feet of elevation gain. Originally, I figured this would be something for next year, but because of the warm fall we’re having, I realized it could be done sooner, “Like this week!” I thought. “Who needs preparation? I’ll just go for it!” 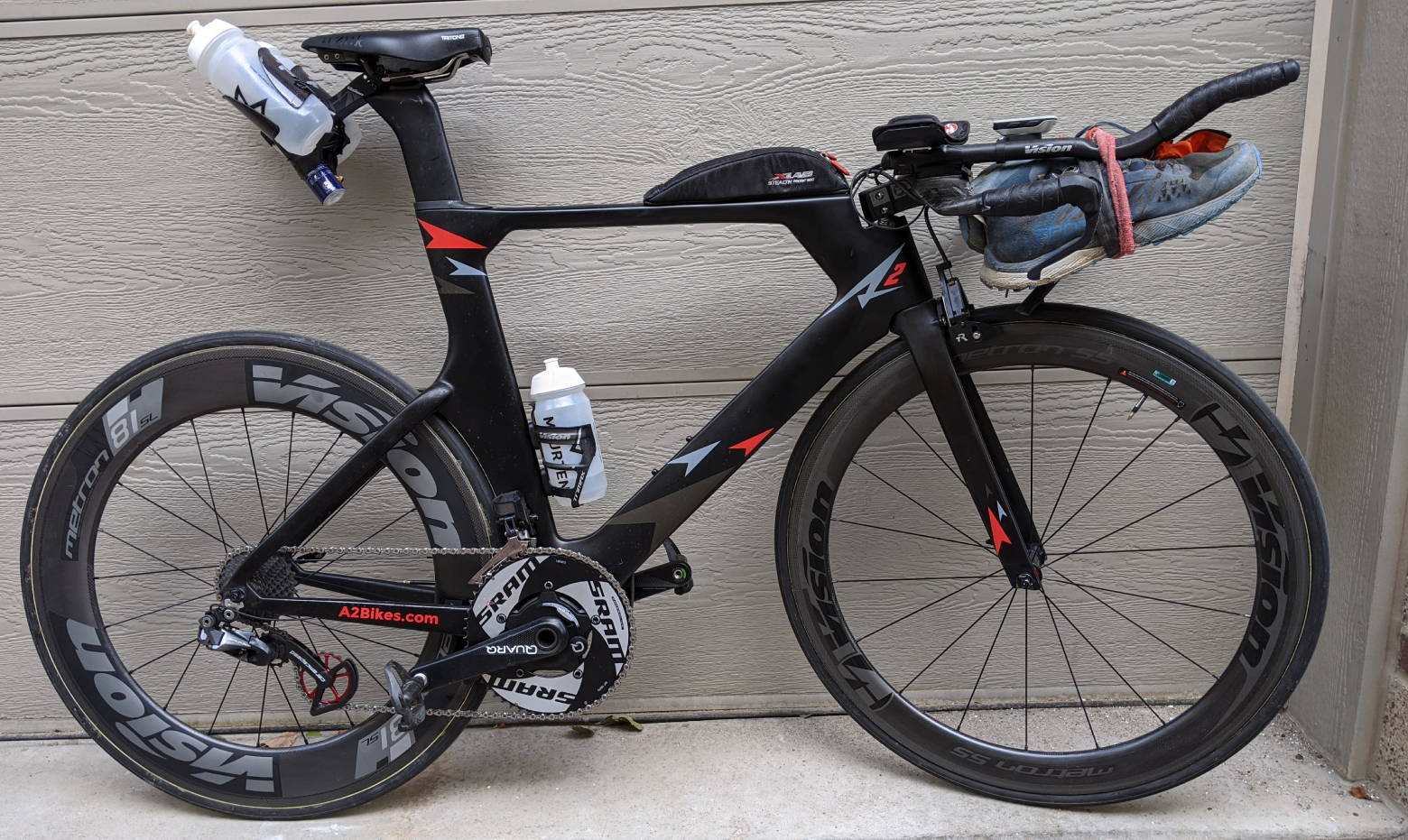 The previous FKT stood for 18 years, which led me to assume that it wasn’t a very hotly contested record. Afterall, it’s not even a 14’er, so why bother amIright? But upon further research, I realized that the previous FKT (4:38 set by Kraig Koski in 2002) was actually sort of fast. He rode to the trailhead in 2:05, summiting in a little over one hour, ran down in 35 minutes, and was back in Boulder in just under 60 minutes. Most likely on a road bike with a backpack, pulling a wagon of beats to the market or something (that’s how I assume people back in 2002 made a living). I began wondering if I could even get to the trailhead in under two hours. I mean, I wasn’t confident I’d ever ridden to Ward without stopping to pee once or five times.

While I didn’t feel like doing any real training for the Duathlon, a few days before I made the attempt, I decided to scout the trail at the very least. But on the damn scouting mission, Adelaide and I ended up hiking to Blue Lake instead after setting out on the wrong trailhead. “I thought Mt. Audubon would be a little more mountainous,” I mentioned to Adelaide. So, I was off to a very similar start as my Longs Peak Duathlon attempt—getting lost at the trailhead and never actually summiting until ‘race’ day.

Thursday, September 24th—I started the FKT attempt nice and early, with an 8:20 AM roll out after two packets of instant cinnamon apple oats, three pieces of toast, and two eggs with sweet chili sauce. As I rode up the base of Lee Hill, I agreed with my past self that I should have done at least some sort of warm up (I live about a quarter mile from Lee Hill and Broadway), but successfully kept my breakfast down and continued grinding away in the 42x28, my smallest gear. I think I made it up and down Lee Hill in around half an hour, which seemed like an okay time. 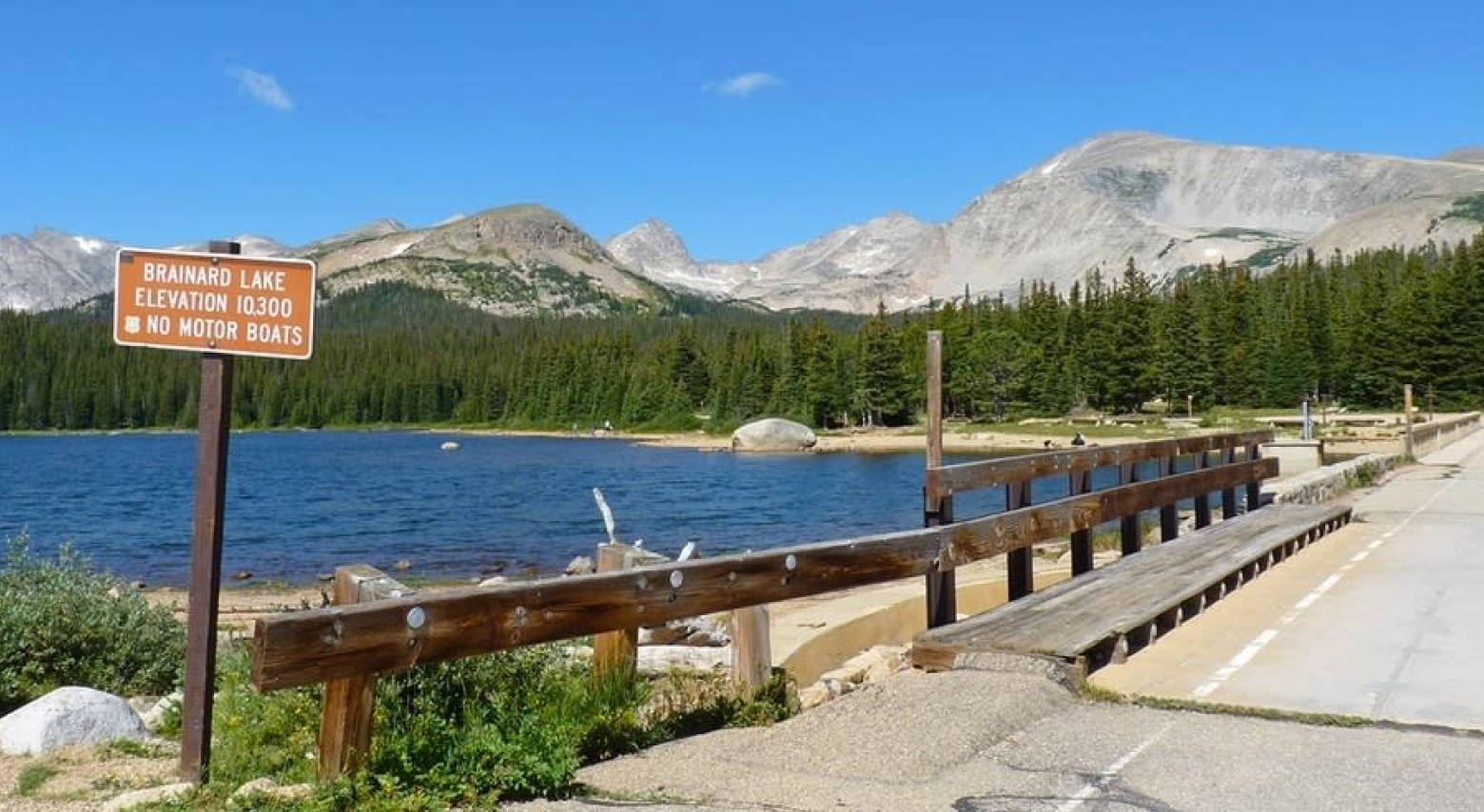 My power dropped from there, and I spent the next 30 minutes calculating times in my head, hoping I’d at least beat the mark Megan Roche set to the trailhead (1:59 hours). She just set the women’s FKT a few days prior, and I was sort of blown away at how fast she rode, especially considering that she isn’t a bike racer or triathlete.

Judging by the headwind I was fighting through Ward, I knew that whatever time I put in today would easily be beatable by my future self on a windless day, which put a dent in my motivation. I think I was looking for a reason to not bury myself, which is why I spent so much time adding numbers in my head instead of just going for it. Anyways, I ended up at the trailhead in an hour and 47 minutes after averaging 287 watts—13 lower than my goal. I hopped off the bike, locked it to the trailhead sign post, and tugged on my running shoes before trotting down the trail and fumbling with a bungee cord that I’d forgotten to leave with my bike.

After stuffing the bungee in my pocket—I’d used it to strap my running shoes to my aerobars during the ride—I set off at a fast walking pace while I tied my windbreaker around my waist. I let out a groan and a curse at how slow the transition was going, then finally set off at a very slow jog. Shit. My legs weren’t working. I could tell straight away that they were tired from getting dropped by Justin the day before on a 10-mile tempo run. My hamstrings and calves already felt trashed and tight, and my quads felt super weak—not good, because I get about 98 percent of my power from my quads. I’m what you call a “non believer” in all the glute activation nonsense. 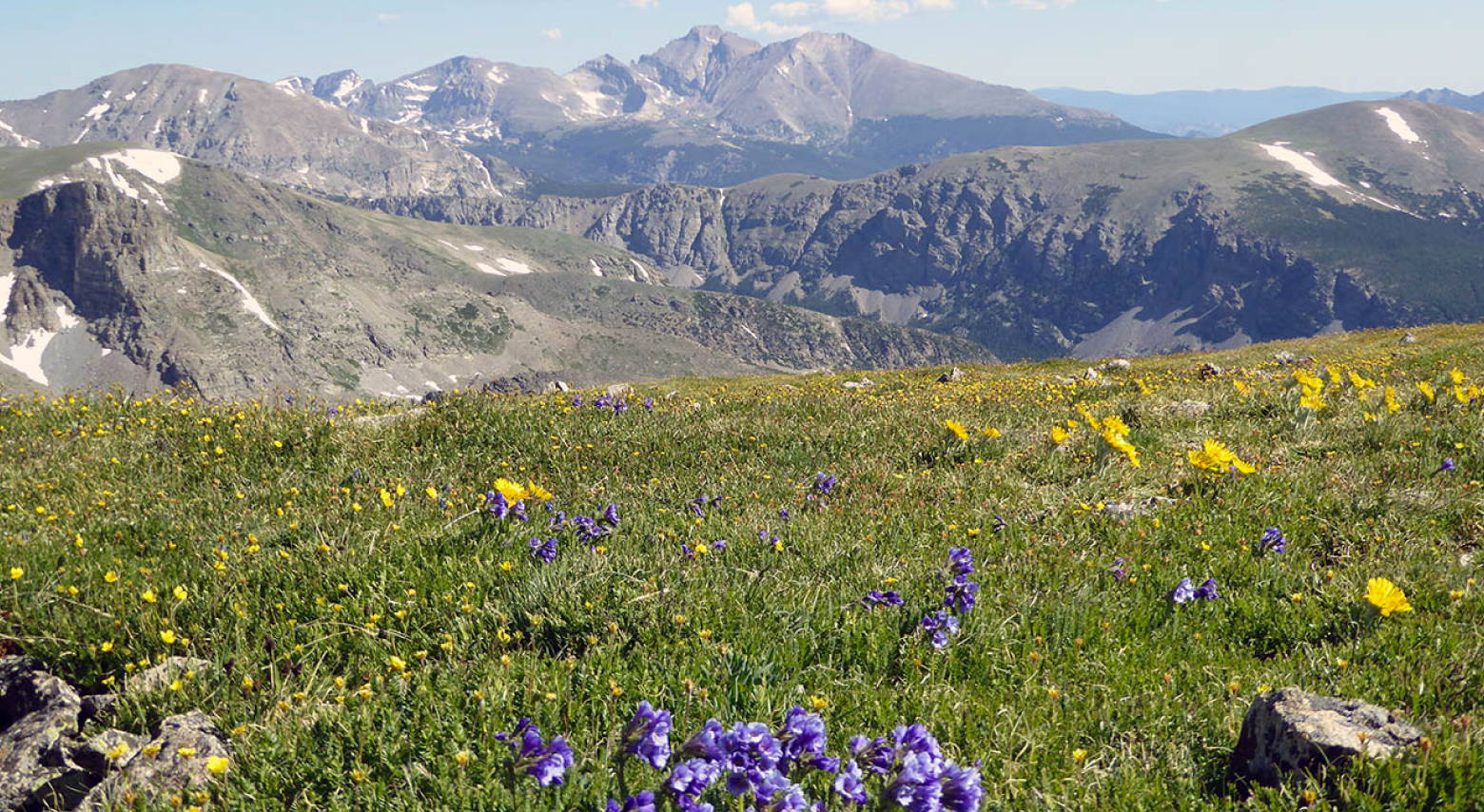 Thankfully, the Audubon trail is fairly forgiving, and the FKT requires that you stay on the trail the whole time, unlike the Longs Peak FKT, which is “open course.” I chugged along like a slow-moving tractor, steadily and letting out nasty exhaust from all ends. I was oddly unable to put myself into threshold due to sheer lack of willpower. But by the halfway-to-the-summit point, I realized I was going to be at the top in roughly one hour (from the trailhead) as long as the terrain didn’t get a lot steeper (it did).

The one hour goal gave me something to shoot for, and I managed to summit in basically 60 minutes exactly, despite the steep talus in the last half mile. I tagged a pile of rocks at the high point of the flat-topped peak, refused to take in any view whatsoever, and began trotting back down the steep talus section. I took a backwards fall and caught myself with my hands, just barely. My ass didn’t make contact with the ground, so I assume this doesn’t count as a true fall, but I took it conservatively from there on out. Baring a flat tire on the bike, I knew I’d take the FKT pretty comfortably, and my body just wasn’t moving well today. I felt slow and uncoordinated, so I tried to just take it easy, focus on my footing, and not sumersault my way down the mountain.

Back on the bike (after a 38 minute descent), I flew down Brainard road, passing a few cars in the process and zipping through Ward without a moment’s thought of getting water at the faucet. I’d hauled two liters up on the bike and still had a full bike bottle left. Over the next half hour, I set the second fastest Strava KOM descent from Ward over Lee Hill, which must have meant I had a favorable wind because I didn’t do much hard pedaling, save for the backside of the Lee Hill climb. Even as I ground my way up and over Lee Hill, I felt sluggish and unmotivated, knowing that sub four hours wasn’t going to happen, and the old FKT was reachable even if I had to push my bike the rest of the way. 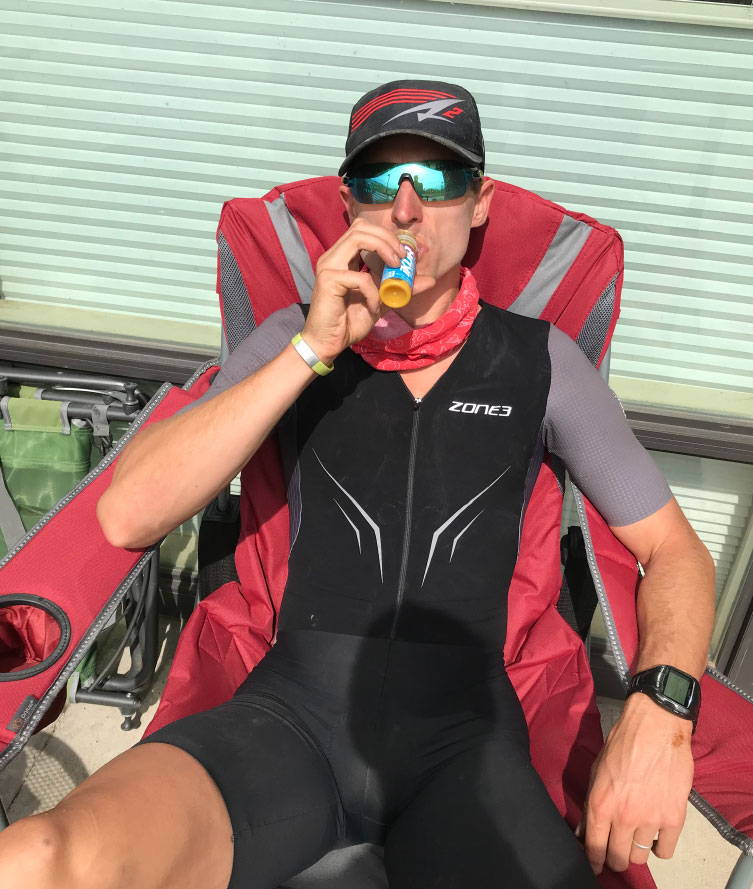 I stopped the clock at Broadway at 4:10:20, roughly half an hour faster than Kraig’s nearly two decade-long FKT, and coasted home, tired but not blown to pieces like two weeks ago after doing Longs.

This record can easily be chopped to pieces by any strong pro triathlete in town on a good day, especially since Audubon requires no technical scrambling or talus skillz. It’s basically all normal hiking terrain. I’ll give it another shot early next summer and see if I can whittle it down by another half hour, which seems possible considering the half-assed effort I gave.

Although, when you’re sitting on the couch writing a blog, it’s hard to remember what the effort really felt like. In retrospect it seemed easy. In reality, I’m sure it hurt. I guess that’s like a lot of races. You almost always look back and feel like you could have given a bit more. Maybe that’s life in general: you look back on even your finest accomplishments with shame, and regret the chances you never took. Or maybe that’s the way a try-hard ends a blog post: searching desperately for deep meaning—a concise one-liner that makes you seem wise and thoughtful—when, of course, there is no such meaning to be found.